“Aslan a man!” said Mr. Beaver sternly. “Certainly not. I tell you, he is the King of the wood and the son of the great Emperor-Beyond-the-Sea….”

“Ooh!” said Susan, “I’d thought he was a man. Is he–quite safe? I shall feel rather nervous about meeting a lion.”

“That you will, dearie, and no mistake,” said Mrs. Beaver, “if there’s anyone who can appear before Aslan without their knees knocking, they’re either braver than most or else just silly.”

“Safe?” said Mr. Beaver. “Don’t you hear what Mrs. Beaver tells you? Who said anything about safe? ‘Course he isn’t safe. But he’s good. He’s the King, I tell you.”

C. S. Lewis, The Lion, the Witch, and the Wardrobe

It all started when . . . in a push to build mentoring relationships and in a series of Management Sessions in the Fall, 2005, we were exhorted to share with our students and colleagues what God was doing in our lives.

It all started when . . . in a Faculty Meeting in Spring, 2006, we were urged to come to the new administration with any suggestions we might have. I nudged Grant at that time and grinned, “There it is. There’s our opportunity.”

God was still working in all that — in my naive optimism and their less-than-sincere exhortations. And when God works, it’s always good even if it is unsafe for systems, prejudices, organizations, and powers. And even if it feels unsafe for all of us wrapped in His arms, I have to keep reminding myself that God is good. Always. 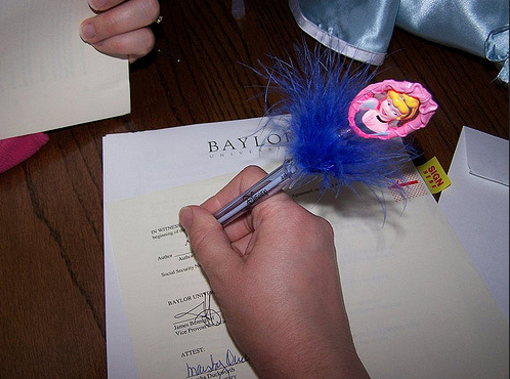 In December, I signed the contract for Baylor to publish my dissertation. I had prayed about it. A lot. And I knew it was a good thing and a chance of a lifetime. I knew that it was good thing for a school seeking accreditation to actually have some peer-reviewed published scholars on the faculty. I knew that I’d kick myself if I dropped the ball — especially after only an idle threat from someone who hadn’t read it. If it’s publish and perish, so be it!

Now, in case you’re wondering and as a matter of record, I did talk to Jim Berg personally — his When Trouble Comes was the subject of my still-in-process chapter as of the October 16 meeting. I shared my concerns in a very casual fashion in the Summer of 2005. I don’t believe he remembers. Another colleague, in order to stimulate discussion, emailed my blog post on the subject to a group which included Jim. He emailed me personally saying, “You don’t really understand all the issues involved, and I hope you don’t share this with the students.” So even though I had no idea way back when that this would blossom into a full-blown chapter, open discussion was just not an option. That was clear. I was dismissed as uninformed and told to be silent. But . . . it’s my academic research. Why should I be quiet about that? Talking about research is how you improve it.

And long before signing any contract, I did communicate a “down and dirty” version of that chapter to the Powers that Be in March 2006 just before Gavin was born. It was much more pointed than the academic critique. My IU professors taught me well that the best rhetorical criticism is self-criticism. And if I didn’t actually submit that chapter or if I changed its purpose or focus, I wanted those concerns at the very least to be heard internally. My email was met with a very cordial and agreeable response. It seemed to me that we agreed. I even saw some subtle changes in focus during In-service that Fall, and one of my superiors asked me for a bibliography on the subject so that he could educate himself. I’m not kidding!! All was well.

But after that October Doomsday meeting, I was no longer the go-to-gal on such matters. That email to the Powers that Be was also discussed at length in that meeting, and I was again told how wrong I was: how I didn’t know my religious history (uh. . . . a Ph.D. minor in Religious Studies isn’t enough?), how I only studied religion at a secular school (What? I took 8 semesters at BJU just like the rest of us in this room!), and how I was just plain ignorant. Mind you, just a few months earlier, the leader of that meeting was coming to me for advice on how to inform himself. But something happened between the beginning of September and October 16th, and I was now considered dangerously ignorant.

And by February, I was getting some really icky vibes from those higher on the food chain. It was weird. Grant actually approached someone on his side of the building to ask if there was some move to edge me out. “We’re a team! You get both or neither of us!” he said. His contact understood but had heard nothing.

The vibes were so strong that I took the bull by the horns. I sent my more-edited-and-now-nearly-final manuscript to Gary Weier who was as high up the corporate ladder as I had influence. He agreed to read it, and I knew he would.

We met on February 16. Gary was very much a gentleman, and he treated me as a friend and a peer. He offered some constructive criticism overall which I was glad to have (scholars thrive on that). It was a good meeting, and I still appreciate his tone and his time.

But. . . . (you knew that was coming, didn’t you?) There was the matter of that last chapter — the one I added after my dissertation defense. In sum, he said:

2) “We can’t have faculty criticizing Jim Berg’s theology.” Now, I objected to this one. I said, “I am not criticizing his theology. I have no room to criticize theology. That’s not my schtick. I’m criticizing his rhetoric. That’s what I do!” His response, “People won’t know the difference.” Okay. . . . maybe. But . . . so? I’m an academic. It’s not like I’m writing for the Times. This is really dull stuff.

3) “You’re misunderstanding him. You need to talk to him.” I had. By this point, on two occasions. Intellectual dialogue about rhetorical nuance was not going to happen. We tried. And while I am an advocate of empathetic criticism, I’m not beholden to the approval of the rhetor. That’s just not the way it works in any critical method. And I appreciate that the author may not intend to say what he is saying, but I don’t have access to that. No rhetorical critic has access to intention (if you want to really discuss it, we rhetoricians would argue that even the producer of rhetoric may not know his own intentions. We don’t really care about intentions. That’s for a rhetor’s therapist, not for the critic.). We only have words (do we have to check with Lincoln before critiquing his “Gettysburg Address”?). But why all the defensiveness over Jim Berg’s writing? It’s a public offering; it should be able to withstand scrutiny. That’s the way it works! If the organization really wants to enter the academic fray — if fundamentalists really want to make scholars like they claim — then let’s do it!

Besides, I critique all sorts of people in the book. And none of them are upset. Why all the hullabaloo over this? Reminds me of another bad reaction to academic research from a closed community.

And I’m still baffled by the insistence that I keep my opinions to myself. We criticize other believer’s ideas all the time — John R. Rice, John MacArthur, John Piper are just a few that come to mind. The Body can improve with those criticisms because we all learn better how to edify each other. Iron sharpens iron. So . . . again, what’s the problem?

Also notice that while I, as a lone faculty member, do speak for the university in my critique, Jim Berg does not. The more I hear this argumentative trope, the more I realize that it really is an avoidance strategy — anything to avoid the scrutiny of the customers.

5) And lastly, “If you publish this last chapter, you will be fired.”

There it was. Well, at least Gary was blunt and to-the-point with me. That was a relief.

I said, “Okay. I appreciate your being honest with me. My real purpose in that chapter is to take Kenneth Burke to task. I think he gets it wrong, and I really want to talk about that.”

He responded with, “Well, he’s an agnostic, so, of course, he’s wrong.”

I ignored that comment because it was missing the whole point. “I’m not devoted to that particular representative anecdote to reveal Burke’s mistakes. Do you have any other ideas for BJU texts?”

We brainstormed a little, but my friend seemed somewhat reluctant. To me, he seemed to simply want to press the point that nothing had changed rhetorically for the organization. I knew that wasn’t the case since I had studied it intimately, and there were plainly not the same outreaches generated as there were prior to Campaign 2000. I understood then and now that it was very important to him as a member of the new administration that everything was the same as before.

I finally said, “Okay — if I can get that last chapter out, the rest is okay?”

“Okay then. I will go call the publisher right now. And I will contact you as soon as I know something.”

I did have a fleeting thought at this point that made me chortle inside: “Do you really want me, Gary, to be . . . uh, independent?”

So I called the publisher. I was scared to death. I hate phones and I hate asking for favors. I braced myself for another brow-beating. Sigh. . . . But God took over. Here was this man down in Texas who didn’t know me in the least, and, I tell you, he treated me just like a Christian sister. I needed that. He put down his more official, professional tone and said, “Camille. . . . let me tell you. I’ve been there. Take my advice — don’t cross ’em. I remember being in a similar situation years ago, and I’ll never forget a man poking his boney finger in my chest and saying, ‘We will destroy you!’ It’s not worth it, Camille. It’s not. You and I know that you’ve written something with integrity. It’s a good thing. And it can still be good without that last chapter. It’s okay. We can take it out. It’ll delay things a little, but it’s okay. . . . I’m so sorry you’re going through this. Marty and I were just talking the other day about you and I said, ‘Does she really belong there?'”

I laughed. But surely it wasn’t as bad as all that, right? Nah. . . . that was his story. That’s not my story. These are still my buddies, right? This is still my home.

I did decide to drop the chapter. I assumed that those who needed to read it had already read it. Now I’m thinking that it will be the basis for another whole book.

Well . . . I’ve kind of been a tease about this, haven’t I? Okay. I won’t build it up any further. You can read it for yourself. Here’s the chapter: “Just Two Choices on the Shelf: Growing Grace or Killing Self.”

17 thoughts on “Ebenezer — The Chapter”