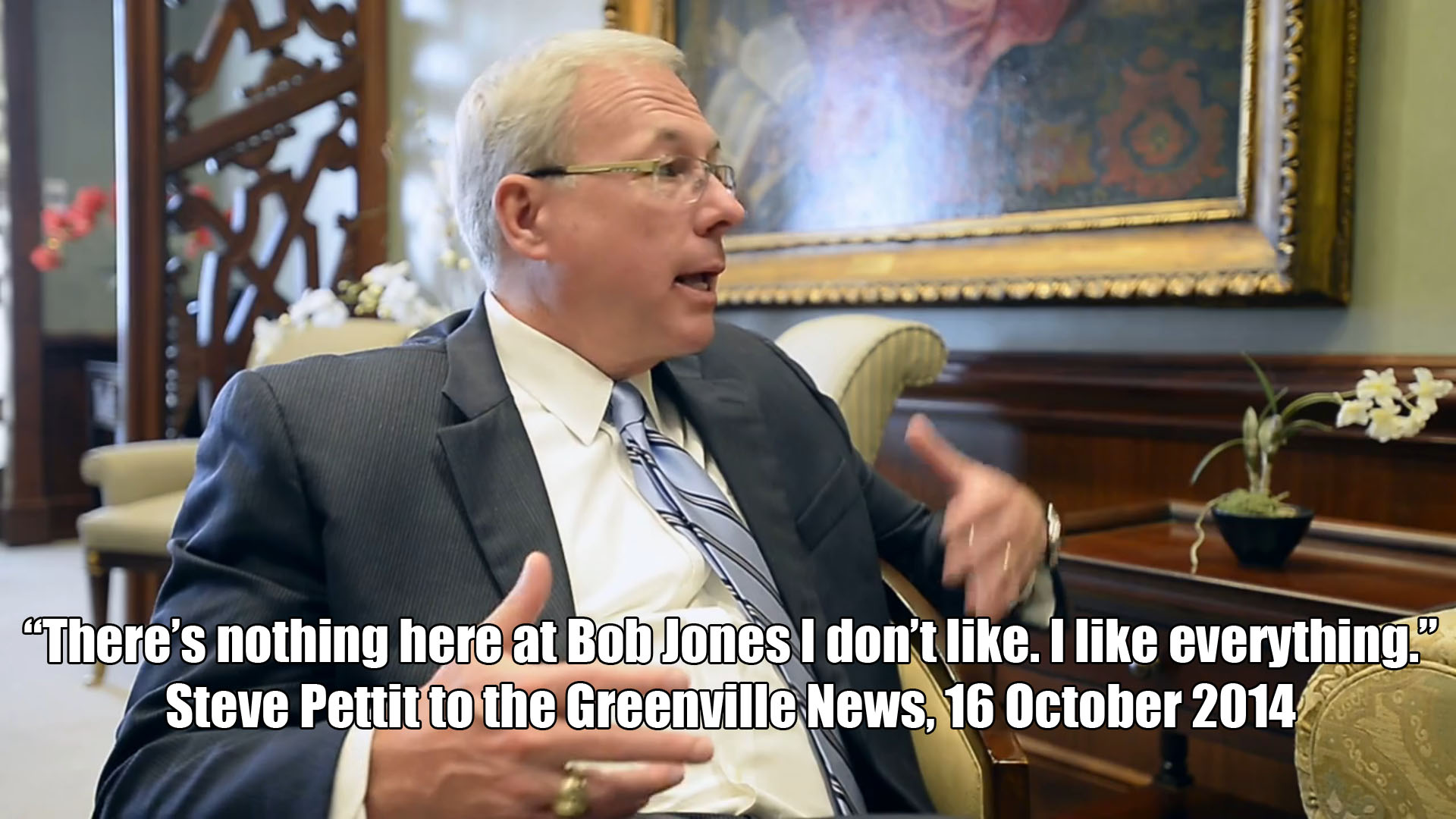 So I have spent a month establishing the pattern from 1933: when the going gets tough, BJU adds more deflecting glitter to their Show Window.

What does this have to do with now?

In January 2013, Godly Response to Abuse in the Christian Environment (GRACE) began its comprehensive investigation into Bob Jones University’s handling of sexual assault. In June 2014, BJU President Pettit and GRACE confirmed an August 31st deadline for the final report. That deadline would be delayed until this December due to a death in the family for a member of the GRACE team.

But think about it — in June, BJU assumed that August 31st would be GRACE’s final report. So what was their move? Their preemptive strike?

On June 26, 2014, under the authority of President Pettit, BJU’s current revision of history appeared. You can go check it out for yourself. But they had it all prepared to beat GRACE to the punch — to show they they were already doing what they anticipated GRACE would recommend.

We alumni have wondered since BJU announced the investigation why they hired GRACE. This was so completely out-of-character for Bob Jones Inc. What could prompt this? Many wondered if alumni outcry was enough to convince BJU to hire GRACE. We all remember the Please Reconcile effort from 2008 where BJU outright insisted (lied) that the alumni petition had nothing to do with their “Statement on/about Race.” Alumni and students got a little more traction in 2011 and persuaded BJU to remove Chuck Phelps from the BJU Board of Trustees. Yet BJU predictably insisted that neither they nor Chuck Phelps were at fault but the lies on the internet about Phelps were the problem. In March 2013, alumni discovered that BJU administrator Joseph Bartosch had been convicted of soliciting a prostitute in 1991. Our efforts got him removed from that position. Scalawags all of us!

In each instance, however, BJU was reacting (never acting) and was consistently projecting blame on anyone but themselves. What would convince them to pay for a comprehensive investigation of themselves?

Rumors flew that Stephen Jones flattered particularly vulnerable alumni and granted them singular credit for the hire. I got two letters (here and here) around that time, too, which I surmise were initial attempts to flatter me into compliance. You always have to doubt their flattery, however. When BJU tells you that you alone are special, beware! It’s a love bomb.

We don’t have to wonder now. BJU itself admits why they hired GRACE. In twisting the facts with their timeline in June 2014, you see, BJU accidentally told the truth. That’s how it happened in 1933, and that’s still how we can discover their motives. Using the same historical detective skills we used to drill down to the probable truth from 1933, we can discover the truth for 2014.

BJU lists the date for the catalyst for eventually hiring GRACE as September 1, 2011. Their explanation is as follows:

In the fall of 2011 when the national news seemed filled with reports of the mishandling of sexual abuse, especially on college campuses, Bob Jones University leadership wanted to make certain that BJU’s policies and procedures for handling reports of sexual abuse both comply with every aspect of the law and ensure a loving, scripturally based response to those involved.

Go look. Go look at the news from that time. There’s nothing. The national news was not “filled with reports of the mishandling of sexual abuse, especially on college campuses.” It just wasn’t. BJU’s PR department wants you to think that they are proactive. They are responsive. They are the morally superior heroes to every story they tell.

But the facts don’t bear that out.

There is one story, however, that explains the date. The Christian Science Monitor reported on Sept 2 that “The Obama administration is holding colleges’ feet to the fire when it comes to how they handle reports of sexual violence and harassment.” There are not news stories flooding the feeds about college campuses at all. It was one announcement from the federal government. This is what is on BJU’s mind, and comparing their timeline to outside sources reveals the motivation for the GRACE investigation.

All colleges are now on notice that they must ensure they’re responding promptly and fairly to reports of sexual misconduct. Federal officials have launched investigations based on information that concerns them about certain campuses.

“All colleges are now on notice” in the Fall of 2011 especially those “certain campuses” that cause federal concern.

And there we have it. There’s their motivation for hiring GRACE. They were on notice from the Feds, and instead of a federal investigation they initially chose an “internal audit.” And we wouldn’t have found it if the BJU PR Department wasn’t working so hard to revise the facts.

BJU is deathly afraid of a federal investigation. Nothing strikes terror in the heart of a Southern fundamentalist more than modern Northern carpetbaggers coming in with their thumb drives and legal pads. BJU hates the Feds. And surely, BJU thought it could schmooze a fellow conservative evangelical into going soft on them in order to skirt any more federal scrutiny, right? They could find a good ol’ boy to join them in throwing the Feds off the scent, right? It’s worked before!

Last month The Washington Post reported that the number of federal investigations into campus sexual assaults has jumped 50%. The chances of a federal investigation of BJU are increasing post-GRACE, not decreasing. But perhaps BJU can throw the Feds off the scent even further by fudging recent history enough that the Feds will move on. Nothing to see here, folks!

In sum, even near the conclusion of the GRACE investigation, BJU desperately constructs a false timeline in order to buy themselves some time to prove to already-scrutinizing federal investigators that they are above reproach.

No matter what we read in the GRACE report in December, the investigating has only just begun.

In my next post, I’ll lay out BJU’s timeline claims alongside the proven facts.