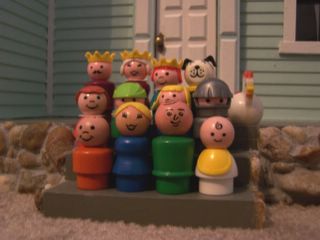 So a toddler’s-lifetime-ago, my parents gave us my old Fisher Price Little People toys. I played with these things for weeks at a time. I later graduated to Barbies, of course, and then the Sims. It’s especially hilarious to turn off the “free-will” setting on The Sims.

Now, let me tell you about my toy-friends. My Raggedy Ann met her alopeciac fate when she went crossways with the washing machine. My Barbies had similar trouble. Well, first of all, they weren’t actually Barbies per se. They were Barbie’s younger groupies, Francie and Skipper (all from Malibu). My mother believed that these models were more realistically shaped (I do agree with her there!). Now, Francie was known in my little world as “Francie the Handicapped Barbie.” Through some unfortunate accident that none of us remember, Francie lost an arm. Now, the other Barbies still loved her — Dorothy Hamill (whose Bicentennial Olympic duds were soooo cool), Quick Curl Skipper (whose hair I genuinely coveted), Growing Up Skipper (whose quick-change gifts were intriguing and quite disturbing), Ballerina (whose sparkly head gear wouldn’t. come. off!), Supersize (whose gigantic proportions frightened all humanoids — both petroleum- and carbon-based. Clearly my dear mother had given up her goals of realistic feminine models by 1978). You see, I had my own little rules I enforced in my created world of little people, and that included a sort of plastic kindness to the armless and balding.

I’m sure you played with your people similarly. You had rules — rules that made perfect sense to you. No, the Little People lady in blue is not the postal carrier. She’s the police woman!! Can’t you tell?? The African-American man is the dentist, not the barber. We’re trying to quash sexual and racial stereotypes in this town!! No, the bed in the castle doesn’t go there. The throne goes there. Can’t you see that you’re blocking the passage to the trap door if you put it there? No, no, no, Francie can’t wear that dress! It only embarrasses her because it highlights her handicap!!

So as my oldest and I sit down to play with my vintage Little People or with his cars or pirates or “red coats and blue coats,” the same thing happens. I sit there thinking, “NO! The teacher’s desk has to go here. It’s the only place it fits!” While he says, “Mommy, you can’t park the green car here. It always goes here.” “Always?” I think. “ALWAYS?? Are you kidding me? I was playing with these toys before you were even born. I certainly know where everything goes!!”

Stage 2 Mythic-Literal faith is the stage in which the person begins to take on for him- or herself the stories, beliefs, and observances that symbolize belonging to his or her community. Beliefs are appropriated with literal interpretations, as are moral rules and attitudes. Symbols are taken as one-dimensional and literal in meaning. In this stage the rise of concrete operations leads to the curbing and ordering of the previous stage’s imaginative composing of the world. . . . The limitations and literalness and an excessive reliance upon reciprocity as a principle for constructing an ultimate environment can result in either an overcontrolling, stilted perfectionism or “works righteousness” or in their opposite, an abasing sense of badness embraced because of mistreatment, neglect, or the apparent disfavor of significant others (149-50).

A tad revealing, eh? Wiki puts it this way:

In psychology, hypocritical behavior is closely related to the fundamental attribution error: individuals are more likely to explain their own actions by their environment, yet they attribute the actions of others to ‘innate characteristics’, thus leading towards judging others while justifying ones’ own actions.

Also, some people genuinely fail to recognize that they have character faults which they condemn in others. This is called psychological projection. This is self-deception rather than deliberate deception of other people. In other words, “psychological hypocrisy” is usually interpreted by psychological theorists to be an unconscious defense mechanism rather than a conscious act of deception, as in the more classic connotation of hypocrisy. People understand vices which they are struggling to overcome or have overcome in the past. Efforts to get other people to overcome such vices may be sincere. There may be an element of hypocrisy as well if the actors do not readily admit to themselves or to others how far they are or have been subject to these vices.

In other words, each of us earnestly believes that our own rules are good and required and even biblical (or based on biblical principle). Others’ rules are arcane, irrelevant, illogical, juvenile, or just plain stupid. And we follow our own rules just perfectly while all those other scofflaws are dooming themselves to perdition. Sure, people call us hypocrites, but they just don’t know the Rules like we do! Tsk-tsk. Well, we all know that we will be rewarded, and they will be punished.