Back in that previous life, my husband and I traveled out West with Dr. Bob and Mrs. Bob one August in 1995 (give or take). It was a ten day trip, using one of “the University’s” jets, with two pilots, two accompanists, and Grant and me — the singers. We were the Poster Couple back in the day, singing duets and holding hands. 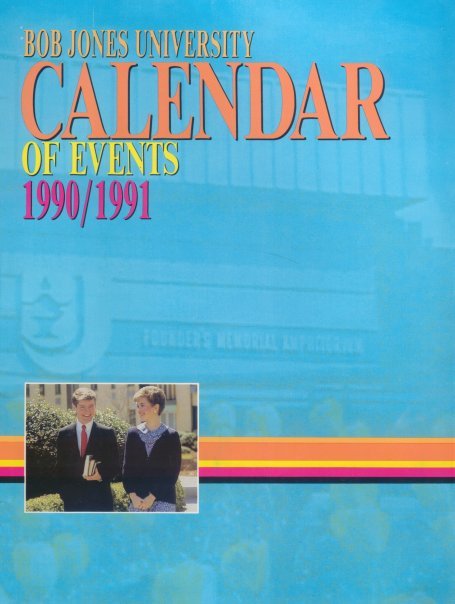 It was a pretty long trip, including Sonora for a good chunk and venturing to Wyoming and Arizona. One stop was a tenuous BJU-plant in Provo, Utah. The biggest yucky-yuck during the pre-service dinner with the pastor was the inevitable audience-befuddling over “BJU” and “BYU.”

Yeah, confusion over which overbearing religious ideology we’re peddling is a real knee-slapper.

Bob made a joke of it that night, and as was always the case for those fundy audiences hearing a big-name-preacher, they laughed uproariously.

And the confusion doesn’t end there. John Elward Brown and Robert Reynolds Jones are so identical that I had to periodically check which book I was reading. John was born a farm boy of nine children in 1879 in Iowa. Bob was a farm boy of twelve children in 1883 in Alabama. Both were Methodists. Both more rough hewn than cultured, but John left school at 11. Bob did at least continue through a few years in college.

Both were called the “Billy Sunday of the South,” each the singular successor to Sam Jones. Both were very profitable evangelists. Both were buddies with Fightin’ Bob Shuler and Wilbur Chapman and John R. Rice. Both preached at Sword conferences.

Hold on. It gets weirder.

Both evangelists were heart-broken over the way young people had lost their faith at godless, urbane colleges. Both were inspired to teach students not just how to make a living, but how to live — a phrase borrowed from Booker T. Washington. John started his school in 1919 in the beautiful Ozarks as John E. Brown College, a vocational high school and junior college. Bob started his school in 1927 on the beautiful shores of the Gulf as Bob Jones College, also a high school and junior college. As for naming the college after themselves, well . . . both claim wanting to do otherwise, but friends insisted.

Now there’s some chatter that Bob started his school out of jealousy over John’s. Given the timeline and eery similarities (and the defensiveness in “correcting” that conclusion), the chatter has some validity. 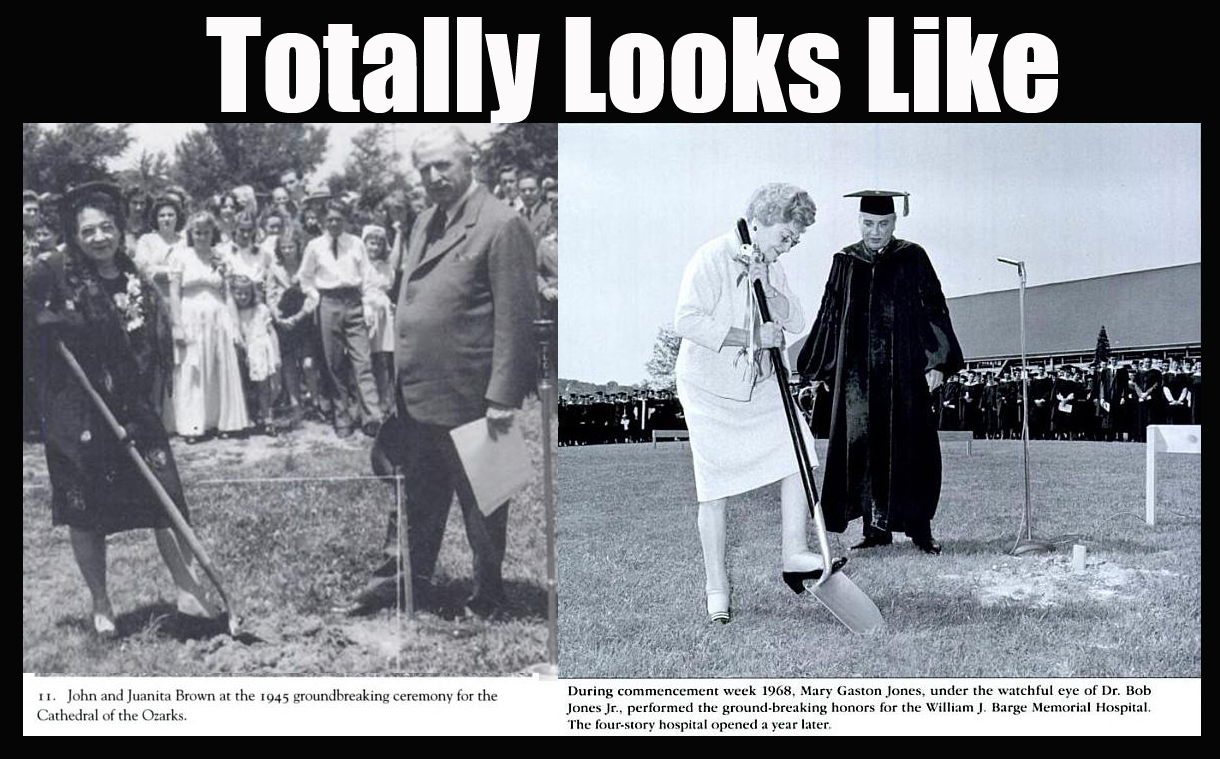 Both schools had strict rules for students — no dancing, smoking, drinking, and especially no jazz! Students had to get special permission to go off campus. Both started with intercollegiate sports and then eliminated the program because of the consorting with unsavory elements. Students at both schools worked to pay for their academic expenses by herding cattle or sewing uniforms at JBU or growing and selling vegetables and dairy products at BJU. Both schools emphasized character formation. Both dormitories were pretty primitive and subpar — John’s were infested with disease-carrying bedbugs and Bob’s were plagued by leaky roofs.

Both founders had trouble with locations. John tried several campuses in Arkansas and California, and Bob moved from Florida to Tennessee “in the middle of the night” and to South Carolina on the eve of Strom‘s Dixiecrat revolt. Both founders complained that locals were out to get them. Both angrily dismissed criticism about academic procedures as distracting from their real purpose of evangelism. Both claimed a kind of national appeal since John had many supporters in California (ex-pat Okies) and Bob’s in Indiana and Ohio.

With their respective cult-like adulation, both demanded loyalty from employees and students. As a result, both had high faculty turnover. Both would “clean house” often — expelling students (“purges” as we called them at BJU) and firing faculty (ahem).

Both required affirmation of loosely-stated fundamental doctrines and eschewed denominational oversight. Both established on-campus churches with a claim of a superior interdenominationality, but with an undertow of distrust for local congregations. Both John and Bob offered support to the Klan in their revivals. Both “enjoyed” all-white student bodies, Bob’s from a clear declaration on the matter and John’s from the Sundown Town status of his school’s locale.

Both had unusually large and conspicuously luxurious homes away from campus. Both were accused of financial indiscretions. Only one had a federal conviction in 1936, however.

Both put family members on the Board of Trustees. Both schools have a “Sr.” as founder, a “Jr.” as a second president, and wait for it. . . . a “III” as the third president. Both entities gave up that falderal after #3.

Bob and John crossed paths at National Association of Evangelicals meetings and Sword conferences. John Brown and John R. Rice joined together to fight the evil Calvinism of Lewis Chafer in the 1940s (Bob agreed, but didn’t want to get his hands dirty). The schools shared advertising space in the Sword.

Bob gave John an honorary in 1937, and John returned the favor to Bob and Bob Jr in 1941. John also gave Bob’s wife’s niece’s husband an honorary in ’39, but you might just know this recipient better as Evangelist Monk Parker. In 1950, John gave Bob’s J. E. B. Davis an honorary, and in 1951 John’s campus pastor Stewart Schimpf got his. In 1948, SotL had a conference at JBU with Bob speaking. 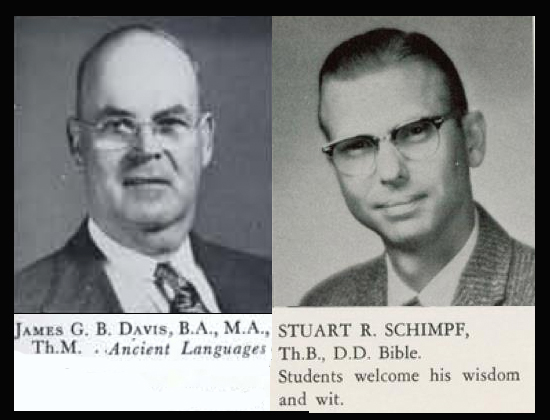 It was one big happy fundy family. Lots of mutual back scratching. Until. . . .

Well, let’s back up.

Both founders fought hard for the residential states to accept their college credits. “Junior college” status means that the students need to move on to a 4-year degree.

In the spring of 1934, the Arkansas State Board of Education examined JBU and approved its program. Fightin’ Bob Schuler gave the dedication address that summer to memorialize the newly minted John Brown University. Arkansas’s endorsement came after 8 long years of back-and-forth between the North Central Association of Colleges and Schools (NCA) and JBU. In the 1930s John visited NCA members in Chicago to plead for his school’s inclusion, and the resulting meeting was a “disaster.” John’s fifth-grade-education couldn’t compete with the terminally-degreed, and in exasperation one member blurted out, “Are you really the president?”

Finally, in 1940 the U of Arkansas relented and accepted JBU credits. But U of Tennessee never did fully accept BJC’s without provisions. Bob had to move and get a special favor from ol’ Strom himself to get his home state to acknowledge his school.

And right there, the virtually identical paths diverge.

In 1946, the JBU faculty organized independently.

In 1947, the JBU Board of Trustees was “free” of all employees and Brown family members.

In 1949, the JBU students had self-governance.

In 1959, JBU jumped into intercollegiate sports.

And in March 1962, the NCA finally granted John Brown University regional accreditation. The struggle that started in 1934, ended 28 years later and only after genuine and provable financial and administrative and faculty independence.

Sure, JBU describes itself as more evangelical than fundamentalist. Now. Their “Sound Generation” looks nothing like BJU’s “Show My People” choir, but then it kind of looks exactly like it in a Hee-Haw v. Lawrence Welk kind of way. They claim to align with Billy Graham, an alignment that Bob noted and criticized in 1959. But 13 years before that, the paths were no longer parallel.

In July 1985, JBU began its intimate association with monolithic Walmart. That endowment with its exclusive MBA’s for Walmart execs puts JBU in a pretty cozy spot for the future. Tyson‘s chicken-empire is a steady donor as well. But I’m not so concerned about them. Those are private funds with, I optimistically assume, outsider oversight.

Whether or not Bob was consciously copying John is irrelevant. Their paths were identical until 1946 when the faculty gained independence. Sixteen years after that JBU was rigorous enough to pass muster and gain accreditation.

Don’t kid yourselves. This is no joke. BJU is not JBU. Or BYU. And for any paying customer or American taxpayer to get confused about that, well . . . BJU is the one laughing . . .

All the way to the bank.