So how did everything go from being just fine to bankruptcy? 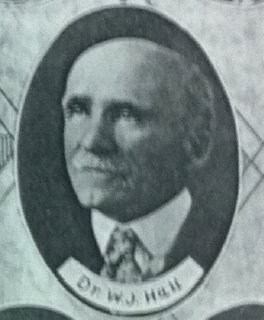 Abrams summarizes Turner’s conclusion that Hall was a “former faculty member who had been fired for liberal theological leanings” who “led . . . some bond holders [to] file for repayment.”

Is any of that true?

First of all, let’s examine Hall’s “liberal theological leanings.” Turner has deduced that Hall was the chief “modernist” from reading the letters in the BJU General Files and by “tracing BJsr’s statements over the years” (p 346), some statements from as late 1958, nearly 25 years after Hall’s death. All his data are from Senior alone; thus, we can conclude that Turner’s read is Senior’s read on the situation. For that, Turner’s text is useful to compare and contrast with other voices.

What does the public record say about William John Hall? By that fateful January in 1933, Pastor Hall was 72 years old. He would only live two more years. He had moved down to Florida like so many middling septuagenarians — for the climate. Just as an aside, his grandson would be the first to map an engineering model of the moon, for what it’s worth.

Hall was 24 years older than Bob Sr. with an earned Ph.D. and a tested ordination. The Presbyterian Ministerial Directory of 1898 (nearly 30 years before Bob Jones College began) documents W. J. Hall as a credentialed pastor:

Knox College was far from “liberal” by any stretch. And men usually don’t turn “liberal” in their seventies, two years before their death. What was really going on here?

Dr. Hall was the assistant editor of the Bob Jones Magazine in 1928-1929. He was a regular contributor on theological issues for those two years, so what was the grave sin which got Hall labeled a “modernist”? How did he go from the expert to the heretic? Did he himself deny the deity of Christ? Was he a universalist? An antinomian?

No. Nothing that deliberated or proven. His great heresy?

He said something positive in class about New York pastor and radio personality, Harry Emerson Fosdick. That’s it.

Fosdick did question the necessity of believing in the virgin birth as a test of orthodoxy, but more pointedly and more personally for Bob Sr. Hall castigated Fundamentalism in his article, “Shall the Fundamentalists Win?”

Hall, in essence, was disloyal to the Tribe.

In 1950, Bob Sr. over-exaggerated the conflict describing Hall as attempting to “[break] down with his subtle propaganda, the morale of the student body.” Senior stormed eight years after that, “I promised the parents of these children and I told the folks that put their money in Bob Jones College that we are going to keep it orthodox. We are not going to surrender. So just pack your clothes and get off this campus.”

Odd statement since local phone directories do not show Dr. Hall living on campus at all. His “clothes” were elsewhere. Bob Sr.’s memories and, thus, Turner’s conclusions are clearly clouded here.

Turner does cite Hall’s contemporaneous reaction to one of Bob’s “reprimands” from 1929:

As to the matter about what you wrote me and I replied, I can only say that I should keep the agreement to the last line…. Someday I should be glad to go into any such matter with you and make a full explanation. Just now, others might become involved in any discussion, but I do think it much better, especially for the present, that the matter be a closed incident. Silence may mean, for me, misunderstanding; but I feel quite sure that it is in every way the wiser course. . . . The church unitedly in the town as far as my influence goes, will be with you and your work.

That doesn’t sound like a trouble-maker. Think about it, Dr. Hall was 30 years older than Bob, an actual ordained minister, with an earned Ph.D., and a pastor at Lynn Haven Presbyterian. That was why he was a threat to never-earned-a-degree Bob. He was everything Bob couldn’t be.

When Hall died in June, 1935, Lynn Haven mourned. The tributes are warm and affectionate. Could any citizen say the same thing about Bob Jones, Sr.?

2 thoughts on “What happened?”