For every complicated problem there is a simple and wrong solution. 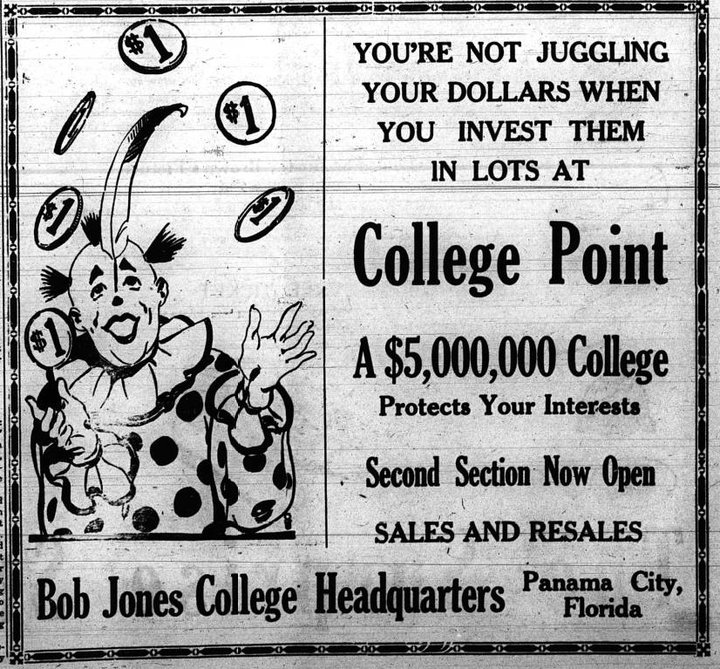 In fundamentalism, when problems are looming on the horizon, it’s easier to find a single, isolated, presumed guilty person who brings “sin in the camp” rather than address the problems themselves. For Dan Turner repeating that Pastor William J. Hall was a “disgruntled” pot-stirrer perpetuates the myth of Bob Jones Sr’s financial competence.

Initially, Turner’s insistence that Hall was a heretic — that is, he was bad in his essence — only prepares the reader to understand that Hall’s standing up to Bob Jones Sr. could not have been anything but evil. Just follow along here:

In 1932, W. J. Hall stepped forward to join forces with the Keith Corporation to threaten the existence of the school. After his firing, Hall had taken advantage of his influence with a small but outspoken group of Lynn Haven and Panama City church people who held Bob Jones College Development Bonds. The group refused to return their bonds for a refund, and when the College finally reneged on its interest payments in late 1932, Hall’s group and the Keith Corporation gained control of a majority of the bonded indebtedness of Bob Jones College. In spite of Dr. Jones’s protestations to the contrary and because no written record could be found of the Keith agreement not to call the bonds, Keith and Hall’s group filed suit for payment, and the court served papers to foreclose on the mortgages of the College.

Bob Jones College, which in the beginning had depended on land sale royalties, then on mortgage payments and the sale of Bob Jones College Development Bonds, and finally donations, now faced ruin (Endnote: BJsr to Howard Bailey. 20 March 1933, Bailey served as counsel for the disgruntled bondholders. BJsr wrote, “You control a majority of the indebtedness of the college. You do not a majority of the bondholders.” W. J. Hall’s name is listed among those who filed suit.) (49).

“W. J. Hall’s name is listed among those who filed suit.” Turner does not give a complete list, and the newspapers, in typical Southern polly-anna decorum, are silent on the matter.

In sum, no non-BJU-influenced sources match the Hall-as-villain narrative. None. He was not a heretic, he was not living on campus, he was not the sole pot-stirrer. It is much more likely that Hall is BJU’s scapegoat, the larger-than-life reprobate upon whom BJU can lay all its sins. The scapegoat must be stripped of all humanity, mocked, humiliated, and most importantly silenced. The denial of the scapegoat’s personhood must be complete, all to prop up the purity of the group. When BJU wasn’t attacking Hall, it was Dorothy Seay or Morton A. Brown or Ted Mercer or Billy Graham or Jack Peters or . . . you get the idea.

If it wasn’t Hall, what was really the problem at Bob Jones College in 1933?