Because BJU history professor Carl Abrams is a seasoned and professional historian, his account is better, in my opinion. He still takes a predictable pot shot at Pastor Hall, but his broader historical focus is useful.

In his narrative on fundamentalists’ “selling the old-time religion,” Abrams compares Jones’ financial trajectory to one of Jones’ besties, “Fightin’ Bob Shuler.” We alumni remember Shuler’s youngest son, Phil, as the visiting evangelist who would end services with such a broad invitation that the entire FMA would have walked the aisle. Bob’s daughter and Phil’s sister, Nell was the unnamed evangelist’s daughter in BJU Faculty Member Dorothy Seay’s article in Mencken’s magazine back in ’38, by the way.

Abrams highlights Shuler’s financial decision to end his magazine, Bob Shuler’s Magazine (catchy title). Shuler started the periodical in 1922 but the Depression forced him to stop in 1933, that same infamous year in Bob Jones College’s history. The Los Angeles Public Library has one issue digitized for public consumption. Take a look.

Read it. Every article is the same: Shuler himself or his wife bloviates for twenty-eight pages in between some ads for vacation homes and exotic alligators as pets. There are frequent appeals for donations, of course, since Shuler is being “persecuted” for his religious beliefs.

Did Shuler really stop his magazine because of the economy? Really? The economy was bad, but is that the singular cause? We hear that argument frequently now as well: the economy has caused the current financial crisis in fundamentalist Christian education, and enrollment is down everywhere because people can’t afford college. Yet the statistics don’t bear that out. The economy can be an amorphous and ubiquitous target, an excuse no one can pin down.

Let’s go to those outside sources again, the ones that even Abrams overlooks. Eighty-years ago this month in 1932, Fightin’ Bob Shuler ran for the US Senate seat from California against state darling (and Woodrow Wilson’s son-in-law) William McAdoo. Shuler lost, of course. His KKK-ties and radio tirades had tainted his attempt.

Shuler was so irritated that California didn’t elect him in ’32 that he pronounced a curse on the entire state of California. Urban legend says that Shuler’s curse caused the March 1933 Long Beach earthquake.

And months after his California Curse, Shuler cancelled his magazine. Was it the economy that cause the 75% dip in subscriptions? Or was it that his political rhetoric had become so shrill and exhausting that people just weren’t buying what he was selling? 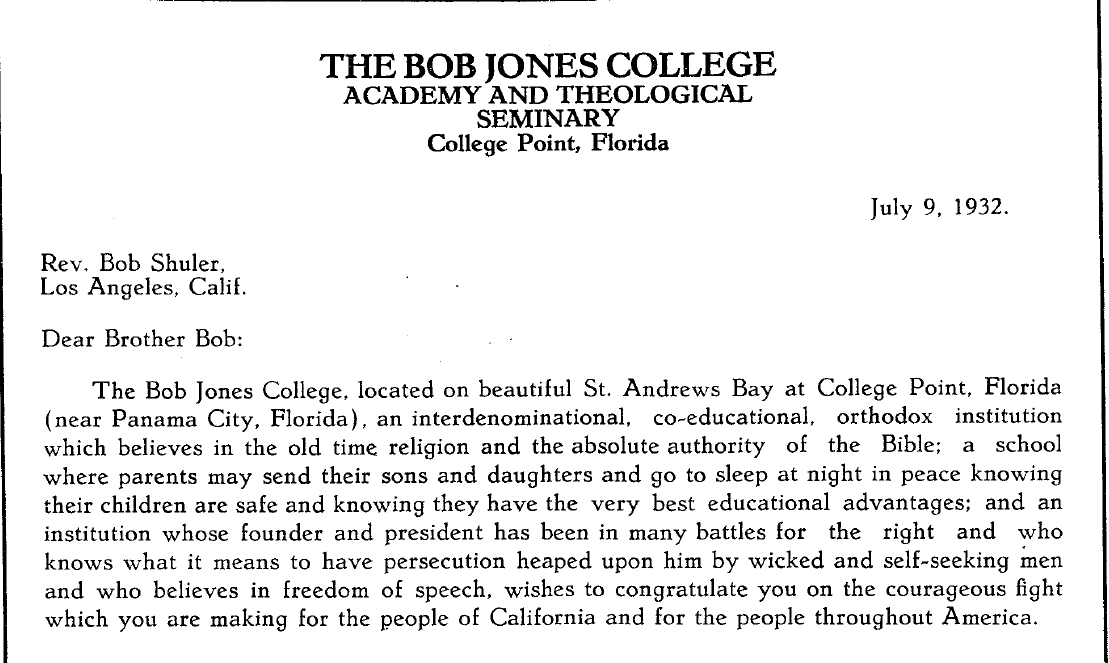 Not only does Abrams connect Shuler’s magazine’s closure to Jones magazine’s closure as similar due to economic downturns in fundamentalist “sales,” but also he offers us some important financial facts that other historians miss. Jones had started his Bob Jones Magazine in 1928 to aid “communicating with my friends.” Hall was his senior editor, remember. The tone of the magazine is heavily political, but it also features Jones’ transcribed sermons. You’ll recognize Joyce Parks’ handwriting in these notations. 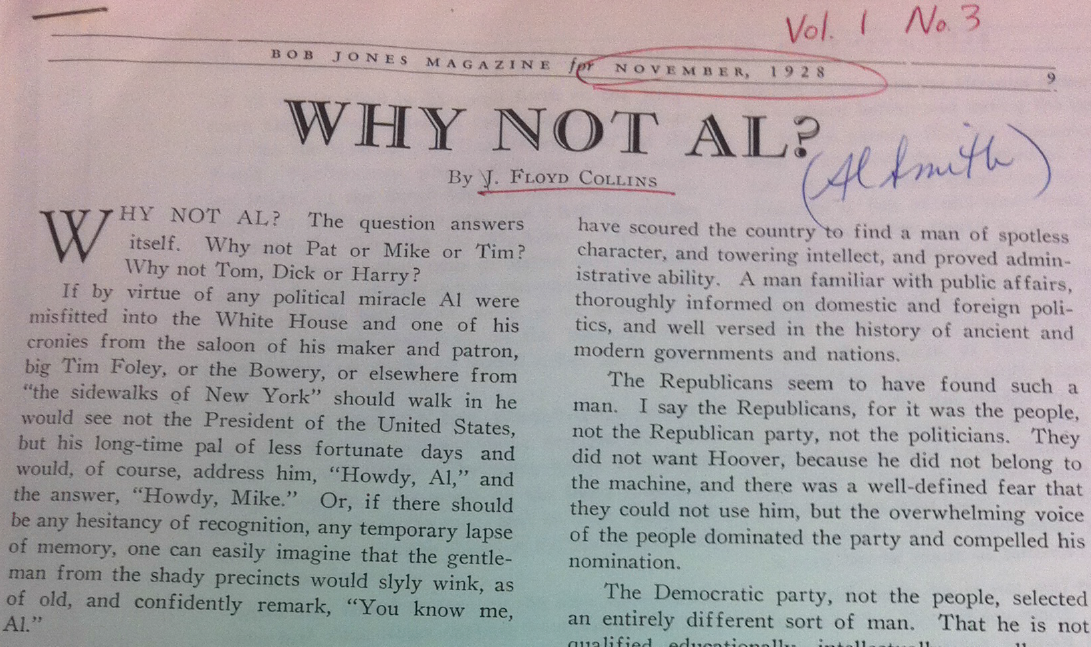 Jones’ stopped publication in 1931 because, he insisted, radio was more economical.  “In these hard times we can spend the money more advantageously by giving the gospel over the radio,” (Abrams 50). Now Jones’ younger buddy John R. Rice would start his little periodical in September 1934, by just passing it out on the streets of Dallas. And the Sword of the Lord still exists. Rice’s tone was different, still political, but he culled from a larger variety of writers, both historical and contemporary.

But was radio cheaper? Really? Paul Rader’s 1930 syndicated Breakfast Brigade cost $50k/month. Or was it that radio was more glamorous? Since Jones packed his board full of religious radio celebrities over the next four decades, it seems more likely that Jones is fudging the financial facts once again in favor of his own ego.

How many times are we going to believe the counter-factual excuses from Bob Jones, Inc.?

Abrams reveals another important but missed fact. During the Depression Jones’ revival cash-cow had dwindled from $50-75K/year to merely $5-7K/year. That’s a 90% cut in funds. Revivalists just weren’t the rock stars they once were. Was it the economy alone or were people just tired of the hype?

Perhaps like Shuler, Jones had worn out his welcome and people were skeptical of the political shenanigans and his . . . well, federal crimes. We never heard that one on Heritage Day.

2 thoughts on “Fightin’ Bobs and a John”