Well now I haven’t seen you in a coon’s age. How are ya? Come on in here. I was just getting ready for the Women on Mission luncheon. Makin’ my hummin’bird cake. Have you had that? Now do not tell me you haven’t. No good Southern cook leaves that out of the repertoire. Surely your mama has made it. You can help me ice the layers.

Can you believe this weather? I thought tornados in the summer were bad enough, but an ice storm? It already nipped the forsythia.

I hope you’re not back for some of my strawberry preserves because I am tellin’ you it’s all gone. Every last jar. I tried to make more this summer than last but my arthritis was just a-flarin’ so bad.

How’s your mama? That’s good to hear. Old friends are the best friends, you know. And your sister? Has she got babies now? Do you have any pictures on your contraption there? Let me get my glasses . . . .

My grandson is always showin’ me things on his gizmo, and I tell you I can’t even focus on it proper. But I still like to see what I can.

I like pictures I can hold and pin to my ice box. Like those up there. From the regular old-fashioned mail. Isn’t she a lovely thing? Look at those curls! Just a princess.

It’s sure nice of Sal to send them to me even though we have no relation whatsoever. I guess he’s proud of his little family. He’s a kind man, I gather. Powerful, now. But kind, just the same. I think he’s happy.

He’s happy ’cause he’s honest. A little princess will do that to a man.

You know what I read about him in the paper last year? I kid you not — Supreme Court Justice Anthony Kennedy actually sent this little princess a leather-bound, pocket-size copy of the U.S. Constitution with her name embossed on it in 24k gold. Like it was the Holy Scriptures or somethin’. I declare. . . .

That’s right — you and I were talking about Sal last time, weren’t we? You need to come more often! Oh dear me, now isn’t that a coincidence? I remember now. Here I go tellin’ stories again. That is not what I want to be known for.

I guess, when you’re here in this big ol’ empty place and livin’ alone after having a house-full, I guess you do prattle on like I do.

That’s right — we were talking about brothers and turkeys last time. Mmm-mmm that was one good turkey that Christmas.

Two turkey brothers preenin’ and feudin’ . . . . Sal doesn’t really mention my friend anymore. I s’pose he has completely molted now after puffin’ up his feathers to his brother. But he’s at least got his health, I s’pose.

Theirs was supposed to be a dream, a family dream. Jet-settin’ and fine-dinin’ and antique-buyin’ — even if it was tee-totalin’. So they say. They were going to be “co-presidents.” Such fools, those boys. His sister is so sick. And his brother — the feudin’ brother — is just gone. Absent. Poof! Never to be found. Like the turkey got run over by a truck and the buzzards took over.

Here’s the second layer now. I cut it flat already. Help me set it straight.

My Great Uncle George told me a vanishin’ story when I was a girl. His bedtime stories never actually put me to sleep. They keyed me up. Grannie would scold him, but he never minded.

Once he told me about his encounter with the Alabama White Thang. 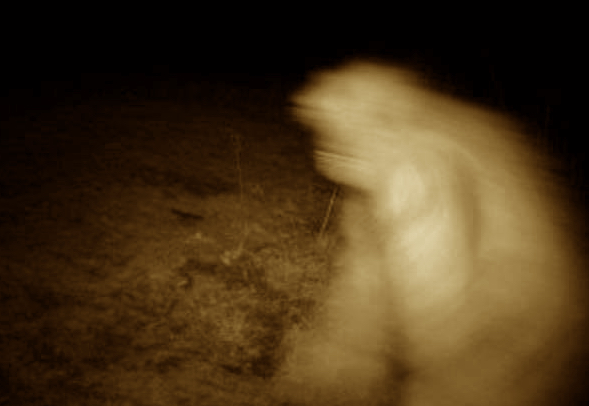 Now stop your gigglin’. Don’t let all that fancy city learnin’ make you forget the country currency of a good story.

George Washington Davidson was as honest as his namesake, my Grannie Narcissa Jane used to say. So I guess I should believe this story as true as if it were embossed in gold and carried in my pocketbook.

My Uncle George and his kin were avid coon hunters and spent many a night in the woods. They had several close encounters with some kind of creature covered in white hair which stunk worse than a skunk, they say.

Some used to say that White Thang screeched like a woman, but George never heard the scream himself. He said the creature’s voice was low and stoney. Said it looked like a lion. Somewhere betwixt a lion and a dog. Bushy. All white with slick, long hair.

And yes, he got a good close look.

George had been huntin’ a coon one night right into the swamp.

Now I don’t recommend coon for eatin’, if you must know. Stick with biscuits and gravy. Coon is greazy and slimy and not worth the trouble. But hunger didn’t know better.

So George had been huntin’ that ol’ coon right into the swamp. So intent he was on gettin’ that dinner that he slipped and dropped his ol’ trusty huntin’ rifle right in the slimy water. George began this new hunt for the rifle in earnest, this time at the bottom of the swamp. With only the moonlight and his wits, he quickly lost track of time and his direction. And he panicked and cried out to the solitary darkness, “I can’t afford to buy another, and now my children will go hungry. What can I do?”

Only it wasn’t solitary out there. And it wasn’t altogether dark neither. George heard someone wade out behind him. He turned . . . expectin’ his kin.

Only it wasn’t his kin. It was Alabama White Thang. Right there. Tall and bushy. No eyes. No ears. At least none that you could see. Just a muscular 7-foot mound of white hair.

The creature ducked in the swamp, as if he were more comfortable in the deep than in the air, and pulled out a gun, glistering yellow in the moonlight. As sure as we’re standin’ here with this cake, Uncle George promised me that gun was gold! “Is this your gun?” the creature rumbled.

Now George, as honest as his namesake, replied, “No sir, it’s not. Mine is plain. With an old wooden stock.”

The creature disappeared into the water again and raised his arm above the water, holdin’ a different gun. This second swamp gun was the shiniest of silvers. Sterlin’, my uncle gathered. “Is this your gun?” the creature asked again.

“No sir, it’s not. My barrel is dull and made of steel.” George replied. Too honest to say different.

A third dunk in the water and this time George saw the creature darting back and forth like a giant white eel, slick and lithe. Finally he rose with the humdrum gun. “Is this your gun?”

As White Thang stepped toward George to hand him the rifle, he handed him three — the ordinary rifle as well as the gold and silver ones.

The creature said as plain as day, “My friend, your honesty deserves a reward. Take all three guns home with you, and your children will never go hungry again!”

Uncle George was so thunderstruck he was numb. He leaned up against swamp tree cypress knees and fell asleep right there, clutchin’ his guns and vowin’ to himself to remember each event in stark detail.

The huntin’ party found him the next mornin’. There at that tree. Clutchin’ the gold, silver, and regular rifles. If he hadn’t had those guns, they would have ignored him entirely. But there was proof. Right there.

Now George had a brother, James Madison Davidson — another presidential namesake — who was powerful jealous of his brother’s fortune. Uncle Maddie wasn’t as honest as George, Grannie said. “Why should my foolish brother have better luck than me?” Maddie groused. “Tonight I’ll try the same trick and come home wealthy too!”

Maddie purposed to return to that swamp the next night and get his own golden rifle. And return he did. But he tossed his only rifle right from the bank and made a powerful fuss so that any creature of the deep could hear.

I always imagined that White Thang came to just get him to hush. The creature appeared and scoured the bottom of the swamp like a catfish. He brought up a glistering golden rifle, “Is this the gun you lost?” he growled.

And the creature plopped the rifle right back in the swamp. “For your dishonesty, you’ll have no rifle at all.” And he vanished just like the guns, leavin’ Uncle Maddie poorer than ever.

Here’s the last layer now. Make sure you don’t get crumbs in the icin’.

Foolish story, isn’t it? I would lie awake after hearin’ it, thinkin’, “If you are so honest, Uncle George, why did you tell me such a tale? You are as poor as me.”

Grannie assured me that there was more truth in fables than in facts sometimes. I s’pose she’s right. The truth is in the lesson, not the details, she’d say. Repeatin’ a pretentious lie like Maddie will make the things you need the most — practical guns or mythical helpers — vanish altogether in the deep.

I think honesty is being friendly within your self. That sounds funny, don’t it? But that’s what I learned from Uncle George. The friendly thing that talks between your inside and your outside, that brings together the real you and the you you wish to be. That friendliness keeps the real you from vanishing.

Maddie wasn’t friendly with that thing. Uncle George was. Sal is, I’d surmise.

I’m happy for Sal and his new husband. He’s a handsome young thing. They are living a lovely dream with a beautiful princess in a castle down by the sea.

And they don’t get ice down there.