My favorite family story of all time is the story of how God brought us all to Him. My favorite re-telling of this story was just after our Elise was born (still). We had all just said good-bye to her — held her, sang her lullabies, admired her perfect features — and my epidural was still wearing off. Dad looked so sad. And that made me terribly sad too. But there in that hospital room, our friend Darrin Hassevoort, clearly following the Spirit’s leading, asked my Dad how he came to know the Lord. Dad brightened and reviewed God’s goodness to our family. It was the best thing for me, too, to remember at that terribly difficult time how much God loved us all.

God protected my parents. He protected Dad in Basic Training. He protected Mom in her rocky start — even in the womb. And that protection has only persisted.

Mom believes that she accepted Christ at age twelve. She was walking home from the candy store with a new comic book she had purchased — a Bible comic book. And she was captivated by all the stories — which all pointed to the Grand Story of Christ. When the book talked about how Jesus had died for the sins of the world, she remembers feeling sadness for her sin and asking God to forgive her in Jesus’ name.

Dad attended a Presbyterian church in college — not because he believed as much as it was respectable. He had fully digested the argumentative, contrarian JW stance as his own. And he liked discussion especially about the Scriptures because he knew it was God’s Word.

Mom and Dad never really saw eye-to-eye on religion and never really had a need to. Until . . . my brother was born. They knew that they had to go somewhere to church for his sake. And Mom wouldn’t set foot in a Kingdom Hall. And Dad certainly wouldn’t be caught dead in a Catholic Mass. So, whatcha gonna do? They compromised . . . Protestant! And all Protestant churches are alike, right? Dad would interject here, “Now, no self-respecting Pollack would be caught dead in a BAPTIST church! Never!!” Then he laughs wistfully and scratches his head and finger combs his hair.

God had moved my family away from Detroit to a rather lonely place for them — South Bend, Indiana. Mom had never set foot outside of Michigan except for her honeymoon, and she was so sentimental about leaving her home that she would still do her grocery shopping in nearby Niles, Michigan.

They picked a respectable downtown church — mainline Presbyterian. And my dear dad, loving to start a rousing discussion, would stir the pot in Sunday School as much as possible. Here’s how he tells it:

“Well, one morning we were discussing something-er-other. And so I said, ‘Why don’t we find out what the BIBLE says?’ And a lady responded — pillar of the church, mind you — ‘Henry! Don’t be silly!! The Bible is for CHILDREN!’ Can you believe that? . . . Pillar of the church!”

Around the same time, some neighbors invited my brother to Vacation Bible School at a nearby fundamentalist Baptist church. The first day he returned to tell Mom, “Hey Mom! I asked Jesus in my heart today!!” “Oh!” my mom cooed and thought, “What a cute way to put it!!”

Steve loved it all — the competition, the memory work, everything. And he got an award at the end of the week for his memory work. So my parents broke all convention and set foot in a Baptist church (of all places) for the first time in their lives.

It didn’t end there. The same neighbors started an Indian Guides group which they soon after abandoned for a new-fangled thing their Baptist church was starting — Awana.

Steve thrived. And because he wanted to get all the awards he could, he begged to attend Sunday morning church. Mom and Dad didn’t like the idea of him going alone with the neighbors, so they switched off. One week Mom would go with him and the next Dad would go.

“Now when Steve would come back from Sunday School at the Presbyterian church,” Dad remembers, “he would always mumble ‘murmurmur.’ But when he came back from the Baptist church, he was so excited! He wouldn’t stop talking about it! So, of course, we went with him to see what he was so happy about.”

I’m forever thankful for those dear friends at Community Baptist Church in South Bend. Pastor Vaughn Sprunger was not intimidated by my dad’s larger-than-life personality and argumentative questions. He seemed to welcome them. The ladies, too, were receptive to my mom and welcomed her to the ladies’ Bible study.

I was born a month premature (40 years ago next month!), and my mom couldn’t leave the house with me. So she offered to open our home to the Bible study. The women were tentative at first, Mom sensed, but they agreed. Because this group was meeting on Mom’s turf, she felt more comfortable to speak up and ask for explanations when she didn’t understand. And there in her own living room, my mom realized her salvation in Christ at 39 years of age.

A brief time later during a Monroe Parker revival service, my dad accepted Christ as His Savior. Not long after all that, at age four, I was listening to Little Marcie sing “Jesus Knocks, Knocks, Knocks,” and I asked my mom what that meant. She explained that song’s metaphor (as out-of-context from Revelation 3 as it might be) that Jesus wants me to invite Him into my life as He knocks, knocks, knocks at my heart’s door. I remember kneeling by the couch and asking Jesus to be my Savior. That couch is still in the family too, except now it’s in my brother’s living room. In many ways really, I never remember a time that I didn’t know Jesus.

We Kaminskis have continued living our happy lives in Christ for these 39 years. My parents have raised two children who love the Lord and who have spouses who love the Lord too. Their grandchildren are all growing up in Christ as well. My parents have amassed enough commentaries to rival any pastoral library. They have been CEF teachers and board members, Awana commanders, and Camp Good News directors. They’ve taught Sunday School for years.

One of my favorite stories about my parents’ ministry began shortly after they were saved. Dad helped and taught in the Junior High Boys’ Sunday School. I always heard him talk about it: “You just love ’em. That’s all they need. Somebody to care.” And he did. I know he did. Dad does everything with his whole heart. He is nothing if not earnest. One young boy was from a broken home and especially needed a reliable father-figure to lean on.

My Mom’s mouth dropped to the floor. The ladies with her gaped and grinned. That meeting led to a happy reunion among old friends in Christ, and everyone left with a vivid object lesson about how God loves His own and how He is best glorified when we love and serve each other.

We Kaminskis all have grown in Christ together, and we all again stand on the threshold of something new but still familiar since God is at the helm. 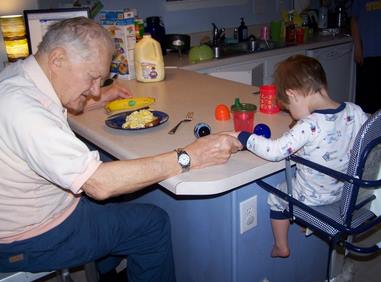 He will tend his flock like a shepherd;
he will gather the lambs in his arms;
he will carry them in his bosom,
and gently lead those that are with young.